Trolls were a BIG thing for me when I was a child and I have to say they were definitely ‘better quality’ in the 1970’s! My sister and I played with them for hours – brushing their hair and making little outfits for them.. Oh and when the ‘miniature trolls’ appeared on the shelves our spending money didn’t stand a chance of being saved!

I can still recall the rubbery smell and when I saw that there is now a TROLLS movie, clearly it was a ‘must see’. Now I’d look pretty stupid sitting in the pictures watching TROLLS on my own so thank goodness I’ve got 2 gorgeous granddaughters who I could drag along with me… Oh and hubby too (he was delighted.. haha)….

From this picture below of one of my great nieces, it would seem that Trolls have re-established themselves within children’s imaginations, which I’m delighted about… I just wish their hair was better quality like it used to be.. (or is that just my rosy coloured memory of days long gone?)

So last Saturday, we trotted off (hubby kicking and screaming..) to The Trafford Centre (he hates this place at the best of times) .. ah well …. TOUGH!! (Oh I’m such a loving and caring wife – maybe that’s the advice I missed out of my previous post on 8 ways to help develop enduring love…    Maybe that’s what they mean when they say ‘tough love’ is good for you sometimes…hahha!) 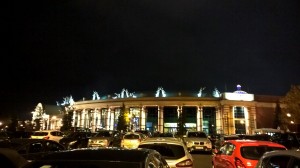 Bare in mind that this was pre-Halloween, we were surprised to see that Xmas had already arrived at The Trafford Centre! 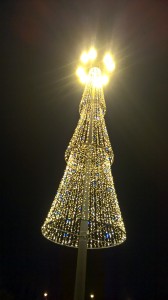 The girls were delighted to see the beautiful decorations and I have to say the crystal chandeliers are amazing… My 4 year old granddaughter was amazed at how they get them to hold up with just a few thin wires – bless her..

It’s amazing what little ones observe and are mesmerised by, that we just take for granted as adults….. Having my granddaughters helps me re-look at the World from the eyes of a child which is magical…

So… back to the Trolls movie – it was lovely and I can definitely recommend it to anyone with young children. It kept both my granddaughters entertained throughout the whole movie.. (sometimes the younger one who is only 4 can start to get ‘fidgety’ toward the end of a feature film but not in Trolls…). It’s a great combination of bright colours, happy songs, cute characters and obviously ‘the evil one’!

I suspect even hubby sneakily quite enjoyed the film, although clearly he’d have no ‘street cred’ if he admitted it.. He definitely enjoyed the popcorn anyway!

After the film it was off to the Orient Food Hall for something to eat. We ended up in Coast to Coast, which I believe has only opened fairly recently. The girls were fascinated by the staff who were all dressed up in Halloween costumes.. I didn’t manage to take a picture of the staff dressed in costumes but I did have a go at a ‘selfie’ … (excuse poor quality picture.. I haven’t had enough ‘selfie practice’!!) 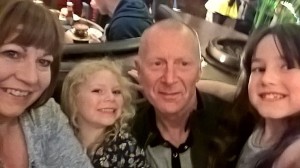 My food was tasty, I ordered Cajun Chicken Skewers which came with chips, salad and two small wraps. I stuck to the chicken and salad in line with my ‘low carb’ healthy eating AND I didn’t have a pudding! – I impressed myself!!! (The chips and wraps didn’t go to waste.. my granddaughters enjoyed them!) 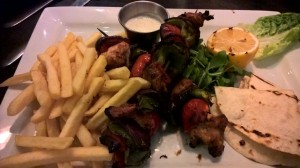 Hubby chose an ‘American Style’ Burger. The burger itself was tasty (according to hubby) but as you can see, the portion wasn’t great and he nabbed a few of my chips too! 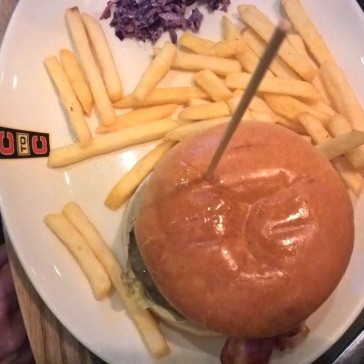 The children’s menu was fairly limited. G chose Pepperoni pizza and to be fair, it was a pretty large pizza for a child.. she could only manage half of it. It came with plenty of Pepperoni but only had a smear of tomato sauce on the base and not much cheese so looked a bit ‘bland’.. (sorry no photo – I’ll try harder on the next ‘eat out’ review!)

I didn’t even look at the desert menu so as not to be tempted and hubby rarely eats deserts and besides – he’d filled up on a full box of popcorn! We asked what was on the desert menu for children… Ice Cream Only which I think is missing a trick.. However, the girls ordered 1 x chocolate ice cream and 1 x mint ice cream. They came with 2 little pots of ice cream and a crispy wafer on each plate. 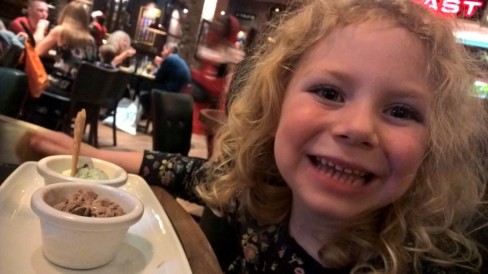 For the purpose of the photo, I’ve shown 3 pots so you see both flavours however, the portion was 2 pots. The girls only managed 1 pot anyway so that was fine… I was tempted to delve in to finish them off but resisted (well I think one teaspoon full may have passed my lips.. oops!)

So our trip to Coast to Coast gets a ‘mixed’ review. The food was good but not great…. It was great to see the staff all dressed up however, I didn’t see a single ‘staff smile’… they all looked pretty grumpy.

It was busy so maybe they were a bit stressed but hey ho… It was Saturday night, their costumes were brilliant and it would have been great to see them having some fun and interacting with their customers, which would have really added something to the atmosphere!

I tried smiling at a couple of the waiters/waitresses but got a ‘grumpy face’ in return… It’s hard not to smile when someone smiles at you but they certainly achieved it!

Putting my many years of experience managing customer service teams and my CIPD Training head on, I think they need me to go in and give them some training on how to achieve Excellence in the Customer Service Department! What do you think?

All in all though we had a lovely evening out and all enjoyed something from our  night out at The Trafford Centre (even if it was only the popcorn!….).

Yikes – it’s a bit scary though to think that Xmas is only round the corner (or in the case of The Trafford Centre, Manchester it’s already here!).

For me though now Halloween is over….. 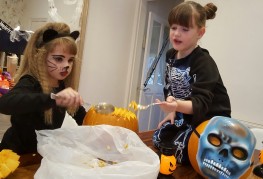 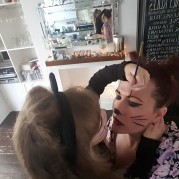 I’m looking forward to Bonfire Night before I can start really thinking about Xmas!!!

(I love this photo taken last year, by my very talented niece Rachel as seen being made up into a cat by her also very creative daughter..)

45 thoughts on “Xmas Has Arrived at The Trafford Centre in Greater Manchester..”